To share your memory on the wall of Surendra Verma, sign in using one of the following options:

Surendra Verma was born on June 19, 1940 in Bulandshar, India to Amichand and Dayawati Singh. As the oldest of seven, he was a pillar of determination for his siblings. He left home at age 11 for boarding school, beginning his pursuit of academic achievement. It was his lifelong goal to ensure each of his siblings also pursued an education, and supported them throughout their journeys.

Surendra attended Nrec College (government college in Khurja, India). From there, he went on to earn his Masters in Chemistry from Aligarh Muslim University, after which he was stationed as a meteorological analyst in Pune. In 1962, after being introduced by their fathers, Surendra married first wife Sneh Tomar in Rajasthan. The two moved to Roorke so Surendra could pursue his PhD in Chemistry from Indian Institute of Technology, Roorkee - the first class of PhDs earned from that IIT campus. In 1966 they welcomed their son, Suneet.

Upon finishing his PhD, Surendra and Sneh moved to Haryana where he took a post as a lecturer at Kurukshetra University. After the sudden passing of his first wife, Surendra moved to the United States to complete his postdoc at Michigan State University in 1968.

After a 40+ year career as a Research Scientist and Associate Professor at Tufts University School of Medicine in Boston, in which he authored more than 100 peer-reviewed papers (including in publications such as Scientific American and Nature) he retired to support Vimi’s passion for food and entertaining, opening Paani Restaurant in 2009.

Surendra was private, intelligent, compassionate, jovial, analytical, and loving. He was an avid gardener with his prize crop being lauki; growing up to 4-ft in length. His lauki were often the victims of envy and eventual theft, which of course, made him even prouder. He became a skilled photographer, loved listening to music and reciting “shayaris” (poems). He enjoyed cooking, whiskey and red wine, and starting each day sitting on the porch, sipping a cup of chai. Surenda was a Pats and Celts superfan, never missing a game on Sunday. A (self-proclaimed) DIY master, another favorite hobby of his was “fixing” things around the house. But most of all, he loved bargain hunting for designer labels at Filenes Basement in downtown Boston.

He is survived by his wife (Vimi), three children (Suneet, Koppel and Pallavi), son- and daughter-in-law (William and Susan) four grandchildren (Kerani, Deven, Amiya and Layla), and four siblings (Rajendra, Dhirendra, Davendra, and Ravendri). He was loved immensely, and will be missed dearly. May his memory be a blessing to all those who knew him.

And, may his body and soul rest in peace.
Read Less

There are no events scheduled. You can still show your support by sending flowers directly to the family, or planting a memorial tree in memory of Surendra Pal Verma.
Plant a Tree

We encourage you to share your most beloved memories of Surendra here, so that the family and other loved ones can always see it. You can upload cherished photographs, or share your favorite stories, and can even comment on those shared by others.

Plant a Tree in Memory of Surendra
Plant a tree 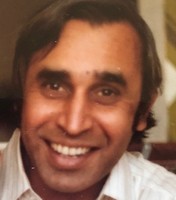