To share your memory on the wall of Sr. Mary Bonia, sign in using one of the following options:

Provide comfort for the family by sending flowers or planting a tree in memory of Sr. Mary Bonia

Provide comfort for the family of Sr. Mary Bonia with a meaningful gesture of sympathy.

Of Waltham, entered eternal rest & peace in the loving arms of her God on Thursday March 26th, 2020 in Maristhill Nursing & Rehabilitation Center in Waltham at the age of 97.

Of Waltham, entered eternal rest & peace in the loving arms of her God on Thursday March 26th, 2020 in Maristhill Nursing & Rehabilitation Center in Waltham at the age of 97.

Sister Mary Elizabeth was born on August 12, 1922 in St. Mary’s Bay, Newfoundland, Canada; beloved daughter of the late John J, Bonia and Elizabeth (Whelan) Bonia. Sister was of a family of 2 boys, William and Joseph and 7 girls, Joan, Kathleen, Madelein, Mary, Frances Lee, Dorothy, and Elizabeth, all of whom predeceased her.

Sister then gave community service until February 1961 when she was missioned to Jamaica from 1961 to 1966. Sister returned to the United States to give service as Mission Bursar in administration until 1970.

Upon the completion of the Maristhill Nursing Home in 1970, Sister became its first Administrator and served in this capacity until 1976.

Sister Mary Elizabeth was missioned to Memphis, TN, where she served as Director of Code North, helping to rehabilitate old dwellings for the poor of the City until 1983. Sister was recalled to Waltham, Massachusetts to serve as Provincial Superior of her community from 1983 until 1988. Sister gave service in community from 1989-1990, when she was missioned to Chicago, where she worked until 1994.

The Union of Major Religious asked her to take up residence with the very poor of Lake Providence, Louisiana where she worked from1995 to 1998. Sister then returned to Waltham and moved into subsidize housing at the St. Mary’s Apartments from 2001-2005. Sister’s next move was to Marillac Assisted Living in August 2005 until 2010. After failing health including a stroke, Sister moved to MaristHill Nursing Home in 2014.

Sister is survived by many cherished nieces, nephews, dear friends as well as her loving & devoted Community of Marist Missionary Sisters.

Out of concern for the COVID 19 health crisis; the Marist Missionary Sisters will gather to celebrate Sister Mary Elizabeth's Life in PRIVATE at the Mary Catherine Chapel of Brasco & Sons on Tuesday March 31st. Burial will follow at Saint Patrick's Cemetery in Watertown. The Marist Sisters will plan a public prayer service at a later date.

Donations may be made in Sister Mary Elizabeth's memory to the Marist Missionary Sisters of the Society of Mary, 349 Grove St., Waltham, MA 02453-6018.
Read Less

We encourage you to share your most beloved memories of Sr. Mary here, so that the family and other loved ones can always see it. You can upload cherished photographs, or share your favorite stories, and can even comment on those shared by others.

Posted Apr 02, 2020 at 08:51pm
I remember Aunt Mary Elizabeth's visits fondly (though I still remember calling her Aunt Agnes). I can say without hesitation that she left some beautiful marks on the world. She devoted her life to learning skills and teaching others as well as helping them with them. She worked tirelessly with the poor, and did all within her power to help them improve their lives (including helping them learn valuable skills). I still have some of her wood/straw art in my home, and will never forget the lessons she taught me. She'll be greatly missed.
Comment Share
Share via:
JB

Posted Apr 02, 2020 at 06:07pm
I was so sorry to hear about the passing of my Aunt. Sr. Elizabeth. I was always amazed at her generosity, her total unselfishness and her endless capacity to show empathy and kindness towards others, especially the less fortunate and she was truly a beautiful Person with a Heart of Gold. She dedicated her entire life to improve the live's of others, which is so sadly lacking in the World today, which makes her so much more of a "Special Person" in my mind and I have so much pride in her numerous accomplishments and her total dedication to making our World a better place. She also molded and instilled these valuable qualities and morals into her family members who will always carry the torch on her behalf and continue to extend a helping hand to anybody requiring it. You will always be in our thoughts and prayers, Sr. Elizabeth and you will most certainly be missed by all.
Love Always,
John Bonia & Family, especially my Mother, Laura Bonia
Comment Share
Share via:
AY

Posted Apr 02, 2020 at 05:16pm
A special thank you to the staff at Maristhill Nursing and Rehabilitation Center for the wonderful care my aunt received during her stay there. I know that this exceptionally kind and caring lady is at peace in her heavenly home. Let us all show kindness to others as a way of carrying her with us through our own lives.
Comment Share
Share via:
J 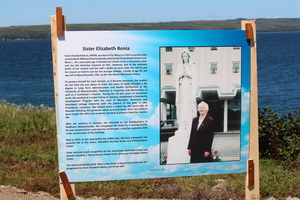 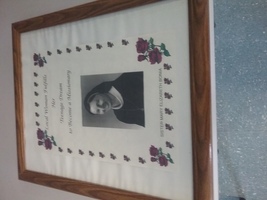 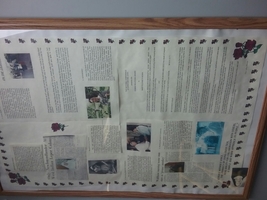