Memorial Candle Tribute From
Brasco & Sons Memorial Chapels Waltham
"We are honored to provide this Book of Memories to the family."
View full message >>>
In Memory of
Argent P.
Iodice
1919 - 2011
Menu
Send Flowers 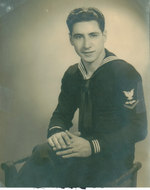 Of Waltham, died Saturday morning, May 28th, at Golden Living Center in Lexington after a lengthy illness. He was 92.

Mr. Iodice was born, raised and educated in Watertown where he spent his youth working on his family's farm with his eight brothers and two sisters. A Waltham resident for 64 years he had also lived in Belmont for a short time.

Mr. Iodice enlisted in the Navy in 1943 and served as an Aviation Radio Technician 3rd Class with Navy's Blimp Airship Program, receiving both the World War II Victory Medal and the American Theatre Medal. He also boxed in the Navy's Light Weight Division.

A Master Dress Cutter, he was employed for Boston Maid Dress and then Puritan Dress Companies as a Supervisor. He had also operated his own business, the "Blue Ribbon Doughnut Shop" on Blue Hill Avenue.

Mr. Iodice's family was his life and he was well known for his incredible sense of humor. As a young man he and his brothers played baseball as a team together and had the opportunity play at Fenway Park. An avid Red Sox fan he took up golf at 65 years old.

He was predeceased by his wife, Susan B. (Alibrandi) Iodice and 7 siblings.

Relatives and friends are respectfully invited to attend Graveside Committal Services with Military Honors in Celebration of Argent's Life on Friday morning at a.m. at the Belmont Cemetery, 121 Grove Street, Belmont. Expressions of sympathy may be made in his memory to the Alzheimer's Association, 311 Arsenal Street, Watertown, MA 02472. The Brasco and Sons Memorial of Belmont is assisting the Iodice Family with arrangements. For additional information please visit www.brascofuneralhome.com.

To send flowers to the family or plant a tree in memory of Argent P. Iodice, please visit our Heartfelt Sympathies Store.