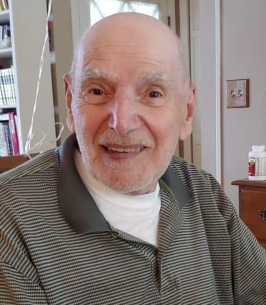 Son of the late Frank and Katherine Vatalaro, John was born and raised in the old “West End” of Boston and loved to relive memories of its closely-knit community with others from the old neighborhood. After serving with the U.S. Army during the Korean War, he met Rose DeSalvo, also of the West End, whom he married at St. Joseph’s Church on September 4, 1955. The couple eventually settled in West Newton, where they raised their family and celebrated many milestones over the years.

John had a natural talent for photography, which evolved into a long career working as a color separator for several print production companies. He could also sing and play any instrument by ear, but most enjoyed playing the organ. After retiring in 1995, John became a self-taught woodworker, building several styles of furniture, as well as learned to cook and bake. Along with these interests, he was an avid history and trivia buff throughout his life and enjoyed solving puzzles.

Family and friends are welcome to gather and celebrate John's life and remember the love and friendship he shared with others at a Funeral Service in the Mary Catherine Chapel of Brasco & Sons Memorial, 773 Moody Street, WALTHAM on Wednesday July 6th at 12:00 pm. Burial will follow at Newton Cemetery.

Those who wish to pay their respects to John and his family can do so in the Brasco & Sons Memorial, 773 Moody Street, WALTHAM on Wednesday morning prior to the service from 10am until 12pm. For those who wish to pay their final respects, but are unable to attend, please be sure to sign the guestbook at www.BrascoFuneralhome.com. or for for more information or phone 781-893-6260.

Donations in John’s memory can be made to Beth Israel Deaconess Medical Center and/or the Alzheimer’s Association.