To share your memory on the wall of Robert Cafarelli, sign in using one of the following options:

Print
Robert Cafarelli left us on May 23, 2021 while sleeping peacefully during his vacation with family in Massachusetts. He was 82 years old.

Preceded in death by both his wives, Maria Theresa of 33 years in 1995 and Maria Delores of 12 year... Read More
Robert Cafarelli left us on May 23, 2021 while sleeping peacefully during his vacation with family in Massachusetts. He was 82 years old.

Brother of late RoseMarie and further survived by niece, Monica and nephew, Steve. Other relatives include cousins, Josephine, Emma and AnnaMaria and very dear close friends.

Extended nieces include Nina, Denise and Michelle and nephews Tony, Paul and Anthony.

Robert was born on March 7, 1939, son of late Silvio and Adele Cafarelli in Pescara, Italy. His passion as a child was playing soccer and ping pong. At the age of 14 in 1953, he began his journey through Ellis Island in the United States, where he joined family members in Somerville, Massachusetts.

Robert joined the Armed Forces of the U.S. in 1962 at age 23. He was stationed at the Home of the Airborne and Special Operations Forces in Fort Bragg, NC and took pride in his service during the Korean conflict. As a Specialty Heavy Vehicle Driver, he operated tanks during this time and was also decorated as an Expert Rifle Marksmanship. Robert proudly and honorably served his country until 1968.

He met the first love of his life and the woman he adored with ALL his heart, Maria Theresa, and they married in Massachusetts also in 1962 (to 1995). After his service, he was an intensively hard worker as a mason. He was an extremely proud husband and father and his devotion and dedication for his family led him to work up to four jobs at a time to provide for the family that he truly loved with all his heart. In 1978, Robert and his family left Massachusetts and moved to Arizona where he continued his passion in masonry, always creative and artistic with the job he enjoyed. He continued spending special moments and memories with his family throughout the years.

After the loss of his first wife, Robert was blessed to continue his life and happiness with the second love of his life, Maria Delores. Married in 2006 (to 2018) they frequently travelled, enjoying their time together. Maria fell in love with Italy and they were planning to continue their life by moving to Italy until she passed.

Even after the loss of two wives, that never stopped Robert from traveling and continuing doing the things he loved the most. He shared his joy, great spirit, and laughter with not only his family but his very close friends. His enormous heart and caring for being able to assist others were shown in his generous offerings. He frequently donated to a variety of organizations including the Veterans, Cancer/Heart Association, Children, Animals . . . and so many more, the list goes on forever. In his spare time, since he had returned to work after retiring, he volunteered at the Food Banks.

Robert had many interests that included traveling, collecting coins, movies and more movies, politics, he loved the casinos and never missed playing the lottery on a weekly basis in over the last 50+ years.

If you choose, you can honor him by wearing his favorite color, light blue.

Forever in our hearts, you will be truly missed, We Love You.
Read Less

To send flowers to the family or plant a tree in memory of Robert Cafarelli, please visit our Heartfelt Sympathies Store. 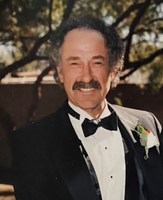