To share your memory on the wall of Anthony Zanco, sign in using one of the following options:

In his younger years he attended both Catholic and Public Schools within the city of Waltham. He proudly served his country in the United States Army and was an active member of Sacred Heart Catholic Church in Waltham.

When it was time to begin his family, Anthony met his “Lady” Joan in October of 1963. They dated for five years and then got married In August of 1968. They shared many, many great memories, lots of fun times. Together they raised three children and have one granddaughter, six grandsons, several nieces, nephews, cousins and extended family members.

He worked in various trades throughout his lifetime. Anthony worked at West End Chevrolet in Waltham from 1956 to 1968. He was in sales and service, was a mechanic and even drove the tow trucks. He would often reminisce of his time there and how much he loved that job. Anthony also worked for several Landscape and Construction companies before he finally retired from ARR-MAX in 1997. He loved to work and took a great deal of pride in his work. Some would say he was a perfectionist.

He had many hobbies and pastimes but family was always his first priority. He could build and fix just about anything. He loved going out to eat with family and friends, taking vacations and day trips to Maine, Cape Cod and has been to Niagara Falls, Canada twice.

He loved to cook, especially his favorite Italian dishes, going to the beach, relaxing out on the front porch, watching his classic westerns, and older crime/drama shows, listening to music from the 50’s and 60’s, and loved classic cars, especially his prized 57’ Chevy.

Anthony was an avid Patriots fan, loved the Red Sox, Bruins, Celtics and even liked the Revolution. He watched WWE wrestling faithfully every week and enjoyed boxing.

He was preceded in death by his older brother; Steve M. Zanco: grandson; Tyler K. Zanco and sisters-in-law; Carol A. Macaluso and Jean M. Macaluso.

Anthony will be deeply missed by many near and far. To his friends he was a great guy, hard worker and more. To his family he was their everything “The man, the myth, the legend”. The memories will last a lifetime and beyond, and are more cherished beyond words. May he rest in eternal paradise until we are reunited again.

Arrangements will be private. A Memorial Service will be planned at a later date.
Read Less

To send flowers to the family or plant a tree in memory of Anthony Albert Zanco Sr., please visit our Heartfelt Sympathies Store.

We encourage you to share your most beloved memories of Anthony here, so that the family and other loved ones can always see it. You can upload cherished photographs, or share your favorite stories, and can even comment on those shared by others.

Posted Jun 13, 2021 at 08:51pm
I worked at West End Chevy and knew Tony . Always the gentleman and a very hard worker. I remember once when we had a snow storm and non of us could get out of WEC because of the storm, most of us sat around visiting, for several hours, NOT TONY, HE GRABED A BROOM AND SWEPT THE ENTIRE BUILDING, Tony, Thank you for your friendship and May you always Rest In Peace! 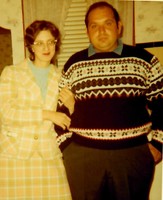