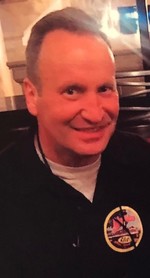 Of Newtonville, passed away peacefully early Saturday morning February 6th, 2021 in the comfort of his home surrounded by his family after a courageous battle with cancer at the age of 62.

Born on January 18, 1959 in Waltham; beloved son of Olive (Dicey) LaBranche and the late Edmund LaBranche. Peter was raised in Waltham but lived most of his life in Newton.

Peter graduated from Waltham High School with the Class of 1978. He had a passion for music and had owned and operated the "Record Man" in Cambridge, Waltham and Chelsea. His love of music didn't stop at work; he formed several bands and played guitar for "Night Wing" and "Lookout". Later in life Peter became a Real Estate Agent working with Century21; Prudential Edna Kranz Realty; and finally with Coldwell Banker.

His family and his friends were always first and foremost; he was loyal, generous, kind, caring and always upbeat even in the face of his own illness. He cherished the time spent with everyone; especially during his amazing 4th of July celebration parties. He had a special way about him that attracted friends from all over. For many years Peter participated in the Boston Marathon Jimmy Fund Walk and The Walk for Hunger.

Dear stepson of the late Walter Borek, brother of the late Gary LaBranche and cherished uncle to the late Stephen LaBranche.

As Peter would say "Happy Birthday".

For the safety of those we love and care about during this difficult time, and for those who wish to pay their respects to Peter and his family, can do so in accordance with CDC, Federal, State & Local guidelines in the Mary Catherine Chapel of Brasco & Sons Memorial, 773 Moody Street, Waltham, MA., on Friday, February 12th from 10:00 a.m. - 12:00 p.m. A Funeral Service in celebration of Peter's life will follow at 12pm and his burial at Mount Feake Cemetery in Waltham.

For those who wish to pay their final respects, but are unable to attend, please be sure to sign the guestbook at www.BrascoFuneralHome.com.

In lieu of flowers expressions of sympathy may be made in Peter's memory to the Dana Farber Cancer Institute or Walk for Hunger.