To share your memory on the wall of Harish Chander, sign in using one of the following options:

He was the proud and loving son of Dr. Har Baghwan ... Read More
Harish Chander, 85,

He was the proud and loving son of Dr. Har Baghwan and Mrs. Sheela Wanti, born in 1935 in the village of Quaim Bharwana, India. He had 4 brothers and 3 sisters. As a child, he witnessed the chaos and tragic loss of 1 million lives that ensued during the partition of India on August 15, 1947 as a result of India's independence from Great Britain. His family emigrated from what is now Pakistan into India. When he was 19 years old, he cared for his 8 year old brother Satish who ultimately succumbed to a battle with diptheria.

He was born into a family who strongly believed in the value and importance of education as well as the importance of hard work. He attended the Indian Institute of Technology in Kharagpur, a premier engineering College in India. Subsequently, he worked for the Municipal Corporation of Delhi and was on the trajectory to being their chief engineer. Instead, he obtained a highly coveted and competitive scholarship to pursue his PH.D in Civil Engineering at West Virginia University in 1968.

From there, he had a quintessentially immigrant story. As a Doctoral candidate, his advisor nicknamed him the human calculator for his ability to quickly perform complex calculations in his brain, a skill that he retained even during his very last days. He traveled back to India in 1969 and had an arranged marriage with his wife Namrata who he loved dearly. After receiving his Doctorate, he had several jobs in the United States before pursuing an amazing opportunity to work at Kameron Engineering, an Engineering firm in Tehran, Iran in 1975. He and his family lived there until 1979, when they witnessed first hand the fall of the Shah and the extremist religious violence that followed.

The family moved back to the United States where they permanently settled in 1980. While raising his family in Framingham, MA, he worked at Stone and Webster as a Civil Engineer until 1991. Then, he and his wife moved to Gaithersberg, MD where he worked for the US Department of Energy and was tasked to ensure that every nuclear power plant in the country was safe and secure from earthquakes. In 2006, he retired and returned to the Boston area to be with his sons and grandchildren. Throughout his journey, Dr. Chander made strong bonds and maintained lifetime friendships.

Through his retirement, many of his nephews and nieces have immigrated from India to be in the United States. He has been described as their “biggest cheerleader” as he took his responsibility as their mentor very seriously. He did his best to be a source of strength and comfort to them.

He enjoyed playing bridge as well as the stock market. He spent countless hours researching information and providing guidance to his family. He maintained very strong relationships with his family in India despite the distance. He loved his family and he also loved his Indian sweets... actually, any sweets. His life was defined by the work he did as well as his love for his family and extended family. His life is a testament to what education and hard work can accomplish and an inspiration to all who knew him.

Out of genuine concern for those we love and care deeply about during this difficult time throughout the world and in our community; family will gather to celebrate Harish's life and remember the love he shared with those he touched in a private traditional Hindu Funeral Service at the Brasco & Sons Memorial Funeral Home in Waltham, MA on Saturday January 30th at 10AM. This will be followed by a cremation service at Saint Michael's Crematory in Boston, MA.

He is survived by his loving wife of 53 years Namrata, his sons Suneer and Vivek, his daughters in law Sejal and Krisztina, and six grandchildren Saira, Safiya, Sahana, Marina, Kavi and Zaina, as well as his large extended family.

He loved them very much. They will miss him dearly.
Read Less

To send flowers to the family or plant a tree in memory of Harish Chander, please visit our Heartfelt Sympathies Store.

We encourage you to share your most beloved memories of Harish here, so that the family and other loved ones can always see it. You can upload cherished photographs, or share your favorite stories, and can even comment on those shared by others. 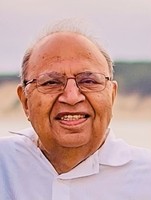