To share your memory on the wall of Francis Maguire, sign in using one of the following options:

Of Waltham, passed away unexpectedly Thursday December 10th, 2020 at Maristhill Nursing & Rehabilitation Center in Waltham after a long illness at the age of 78.

Of Waltham, passed away unexpectedly Thursday December 10th, 2020 at Maristhill Nursing & Rehabilitation Center in Waltham after a long illness at the age of 78.

Born on February 5, 1942 in Boston; beloved son of the late Francis E. Maguire and Elizabeth H. (Ahern) Maguire. Frank was raised in Cambridge and had resided in Waltham for over 50 years. He spent many winters in Florida.

A graduate of Ringe Technical School in Cambridge; Frank had been employed with the Polaroid Corporation in Waltham and Needham for 28 years and as a Referee for local sporting events including baseball, football, soccer, and basketball.

After his retirement from Polaroid, he loved to play cards, do crossword puzzles and continued refereeing for many years; but his greatest enjoyment came from spending time with his family, especially with the love of his life, his wife Camille.

Frank is survived by his beloved wife of 54 years Camille (Bonacci) Maguire; his devoted and loving children Frankie and his wife Kim of Holliston; Susan Menendez and her husband Luis of Waltham; and Brian Maguire of Waltham; his cherished grandchildren, Kevin Walker, Emily Maguire, Nicholas and Antonio Menendez. Two adoring great grandchildren Marc and Hunter Smith, and siblings Jack Maguire of IN; Deborah McKeever of Rockport and Barbara Gilbert of Weymouth. In addition he is survived by many nieces, nephews, close friends, and his extended family Anthony and Sheila Bonacci, Roy and Mary Creedon, Frances, Joseph, and Salvatore Bonacci who loved him dearly

Out of genuine concern for those we love and care deeply about during this difficult time throughout the world and in our community, family will gather to celebrate Frank's life and remember the love he shared with those he touched in a private Graveside Funeral Service at Saint Patrick's Cemetery in Watertown.

For the safety of those we love and care so much for, a Celebration of Life for Frank's Life will be held for family & friends when social distancing guidelines allow.

In lieu of flowers expressions of sympathy may be made in Frank's memory to the Joslin Diabetes Center.
Read Less

To send flowers to the family or plant a tree in memory of Francis E. "Frank" Maguire Jr., please visit our Heartfelt Sympathies Store.

We encourage you to share your most beloved memories of Francis here, so that the family and other loved ones can always see it. You can upload cherished photographs, or share your favorite stories, and can even comment on those shared by others.

Danny & Angela McCarthy, The Chapelles, and other have sent flowers to the family of Francis E. "Frank" Maguire Jr.
Show you care by sending flowers

Posted Dec 22, 2020 at 11:02am
Our condolences Camilla. So sorry to hear of Frank’s passing. He was one of the good guys!
Comment Share
Share via:
PM

Posted Dec 21, 2020 at 08:49pm
One of my favorite memories with Big Frank was the Florida trip. He rented two Astro van's for himself and 10 teenage boys to drive from Waltham to Florida...and back. One of the best trips I have ever been on with friends and Big Frank made it happen. He loved seeing us having a good time and somehow kept us in line. We had many laughs over the years and he will be missed by all. Our sincerest condolences to Camille, Frankie, Brian, Susan and family.
Love,
The Mazzocchi's
Comment Share
Share via:
DM

Posted Dec 20, 2020 at 07:21pm
Big Frank will be missed, he was always there making us laugh. Young Frankie's house was usually where we met and/or hung out, growing up. Frank and Camille opened their house to all their children's friends and I have so many good memories because of them. I'll never forget Frank's big smile and humor. My prayers for Camille, Frankie, Brian, Susan & their families.  I'm really going to miss the Big Guy!

The Chapelles purchased flowers for the family of Francis Maguire. Send Flowers 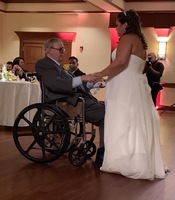