To share your memory on the wall of Alexander Ferrazzoli, sign in using one of the following options:

Dr. Alex was a scientific researcher with Brandeis University for the past 13 years. He was a molecular biologist, geneticist, bioinformatician and Director of Sequencing, primarily with the Lovett & Haber labs. Students actually presented a petition, unbeknownst to Alex, to have him teach a course on historic comedy (he chuckled & declined). Dr. Alex would make the most technical presentation interesting, combining humor with a thorough grasp of the organized facts. His unofficial video to inspire people to clean their test tubes is probably still circulating. He taught students to think & question instead of just memorize, while maintaining high quality standards. He challenged authority when he believed it was the right thing to do.

Alexander saw beauty in the world around him, documenting his journeys with his beloved Nikon camera, although the pandemic postponed his next trip back to Vienna, Austria. He adored cooking, trying new techniques and foods. He was searching for property to own with his brother to expand his skills into home remodeling. Alex was a fan of podcasts, political debate and was frustrated by currently unprincipled media, instead following journalists like Matt Taibbi. He would have loved challenging the Medical Examiner's refusal to do an autopsy because of virus symptoms. He feared for the entitled generations living via social media, along with those believing in outrage based on rumors & speculation instead of fact.

Alexander attended a science conference during the day & played jazz piano after hours. His interests & talents were boundless; his dedication, trustworthiness & kindness unmatched. Those closest agreed that Alexander was a combination of the real life Larry David and Seinfeld character George Costanza, bringing joy to everyone who loved him. He had a gift for seeing problems objectively & creatively, resulting in the right questions to eliminate the errors & find the solutions. Alexander was known for disarming people with comedy, particularly in difficult situations, always maintaining honesty. May his legacy of demanding high performance, integrity with thoughtful clarity, kindness and humor live on.

Donations in memory of Dr. Alexander Ferrazzoli should be directed to the Department of Biology at Brandeis University, so that his innovative research lives on. Memorial gifts can be made online at giving.brandeis.edu. Call 800-333-1948 or email giving@brandeis.edu for further information.

Due to the recent impact of Covid-19. For the safety of those they love and care for, a celebration of Alexander’s life will be held during a Memorial Mass Wednesday September 30, 2020 at 7pm.
Read Less

There are no events scheduled. You can still show your support by sending flowers directly to the family, or planting a memorial tree in memory of Alexander Edward Ferrazzoli.
Plant a Tree

We encourage you to share your most beloved memories of Alexander here, so that the family and other loved ones can always see it. You can upload cherished photographs, or share your favorite stories, and can even comment on those shared by others.

Posted Sep 03, 2020 at 04:36pm
Alex thank you so much for your guidance and humor you made my time at Brandeis so much better. The world has lost a great mind, a great human being.

Thank you for your kind words and the tree.
BB

Posted Aug 31, 2020 at 05:20pm
Our hearts and thoughts are with the family of Alex; his warm and inspiring presence will be deeply missed.

Thank you for your thoughts and the tree.
JV

Thank you for the tree & for starting his nickname!
HS

Thank you so much. 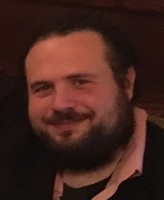