To share your memory on the wall of Sr. Mercedes Kirst, sign in using one of the following options:

Provide comfort for the family by sending flowers or planting a tree in memory of Sr. Mercedes Kirst

Provide comfort for the family by sending flowers or planting a tree in memory of Sr. Mercedes Kirst

Of Waltham, peacefully entered eternal life in the loving arms of her God on Thursday, July 30th, 2020 at the Saint Elizabeth's Medical Center in Boston at the age of 93.

Of Waltham, peacefully entered eternal life in the loving arms of her God on Thursday, July 30th, 2020 at the Saint Elizabeth's Medical Center in Boston at the age of 93.

Born on May 10, 1927 in Buffalo, New York; beloved daughter of the late Henry F. Kirst and Florence (Bernhard) Kirst.

Sister Mercedes had only one sister, Corinne, who died prior to Sister. Sister entered the Marist Missionary Sisters of the Society of Mary on August 2, 1945. After her initial formation, Sister was professed on February 2, 1948.

Soon after her Profession, Sister Mercedes began her nurses' training at St. John's Hospital in Lowell, MA., where she graduated from in 1951.

Sister was on her way to Australia in 1952 where she worked in Our Lourdes Hospital in Killara until 1955. Sister made her Final Profession as a Marist in Killara Australia on February 2, 1954 and was missioned to Bougainvllle by August 1955. She worked as a Nurse, Midwife and Tutor until 1962 when she came back to the United States for a Spiritual Renewal.

Sister remained in the States to work as Directress of formation for the Novices from 1962-1966. Sister then went to Boston College for further studies from 1966-1968.

Sister gave community service once again until she left for Bougainville to give service from 1972-1978. After a Spiritual renewal in 1978, she returned to Bougainville to continue nursing until 1984.

Sister was missioned to Sydney, Australia in 1984 until 1992 where she gave community service before going to Rome and her Home visit.

In 1993, Sister Mercedes transferred back to the North American Province where she gave community service in Arlington, MA. and Waltham, MA. through 2005. As her own health began to need attention, Sister was missioned to Marillac Assisted Living in Wellesley, MA. in 2005.

In 2010, Sr. Mercedes' health required her to move to St. Patrick's Manor in Framingham, MA. Sister moved to Marian Manor in South Boston in 2012.

Due to Covid 19 and out of concern for those Sr. Mercedes loved and cared for; the Marist Sisters will gather to celebrate Sr. Mercedes life and remember the Love she shared at a private Graveside Funeral Service in the Marist Missionary Lot at St. Patrick’s Cemetery in Watertown.

In Lieu of Flowers, memorial donations may be made to:
Marist Missionary Sisters
349 Grove St.
Waltham, MA. 02453
Read Less

To send flowers to the family or plant a tree in memory of Sr. Mercedes "Sr. Mary Regis SMSM" Kirst, please visit our Heartfelt Sympathies Store.

We encourage you to share your most beloved memories of Sr. Mercedes here, so that the family and other loved ones can always see it. You can upload cherished photographs, or share your favorite stories, and can even comment on those shared by others. 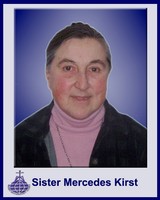