To share your memory on the wall of Louis Nocera, sign in using one of the following options:

Of Waltham, Massachusetts, passed peacefully into eternal rest on July 1, 2020 in Florida.

Of Waltham, Massachusetts, passed peacefully into eternal rest on July 1, 2020 in Florida.

Lou Nocera and his late wife, Betty, had seven children. He was the cherished father of Joseph and Jeanne Mula Nocera of Waltham; James and Lynda Calvino Nocera of Weston; John and Susan Hegarty Nocera of Bedford; Jeffrey and Susan Mahon Nocera of Westwood; Linda Jacobs of Waltham; Jerome and Chrisann Taras Nocera of Waltham; and the late Jason Nocera. Lou gained three stepchildren when he married Anne Marie Nocera, becoming the beloved stepfather of Wayne Morse, George Morse and Michelle Morse.

Lou Nocera was a graduate of St. Mary’s High School in Waltham where he was a standout basketball player. He was graduated from Boston College. He married Betty Schmidt in 1952. He served in the Air Force (1951-1954) in Mississippi and Texas. He was a lifelong fan of all Boston sports teams, but held a special affection for the Boston Red Sox. He loved music and was a talented pianist. Lou was a devout Catholic and a lifelong parishioner of St. Mary Church in Waltham and his faith figured prominently in everything he did.

Louis Nocera expanded the tiny Chateau Café owned by his father to its current seating capacity of 800 seats. He was immensely proud of the expansion of his restaurant business under the leadership of his sons to its current scope of thirteen restaurants throughout Massachusetts under the Chateau and Jake n Joe’s banners. Lou’s business legacy is now being capably guided by his children and grandchildren. Lou Nocera, along with the late Ira Gordon, were granted the first charter to bring cable television to Waltham in the 1970s.

A generous philanthropist, Lou Nocera shared his success with his hometown of Waltham in countless ways. He was instrumental in many causes in Waltham, the benefits of which are still being enjoyed to this day: the establishment of the Waltham Museum, lights for Warren Field, the Centennial Parade in 1998, annual Fourth of July fireworks, the Waltham Centennial Cookbook, the Waltham Tourism and Restaurant Guide, the Waltham Rediscovered project and book and many other endeavors. He founded Mary’s House and worked tirelessly for the Bristol Lodge. The Chateau Restaurant sponsored youth sports teams at every level and avidly supported girl's athletics. Lou was a supporter of the Reagle Players, and the Salvation Army. He served on the boards of several organizations, including The Boys and Girls Club, the Waltham Chamber of Commerce and the Massachusetts Restaurant Association. He was a senator of the National Jr. Chamber of Commerce.

Over the years, Lou Nocera received countless honors and awards for his good works. Whenever there was a need in the community or an event in need of support, Lou Nocera was unfailingly generous and benevolent, oftentimes contributing anonymously. Lou was known by many as Mr. Waltham. He truly loved his hometown.

For the safety of those we love and care about during this difficult time, and for those who wish to pay their respects to Lou and his family can do so in accordance with CDC, Federal and State guidelines by remaining in your vehicle and processioning by the Main Entrance of Brasco & Sons Memorial Funeral Home, 773 Moody Street, Waltham, MA., on Wednesday July 8th from 4:00 – 7:00 p.m. For those that may not be able to attend the viewing the service will be live streamed by going to harborviewvideo.com/brasco

The family will gather to share their love and support for one another during a Private Funeral Mass in celebration of Lou’s life at Saint Mary’s Church in Waltham followed by his burial with United States Air Force Military Honors at Mt. Feake Cemetery in Waltham on Thursday July 9th at 12:00 p.m.

In lieu of flowers expressions of sympathy may be made in his memory to the Waltham Boys & Girls Club, 20 Exchange Street, Waltham, MA 02453
Read Less

To send flowers to the family or plant a tree in memory of Louis Joseph Nocera, please visit our Heartfelt Sympathies Store.

Posted Sep 12, 2020 at 09:04pm
Hi my name is james Tumminelli. I would have liked to have met your Dad. When my dad was living he told me that he used to play with Luo when their were kids growing up in Waltham. My condolences to the family.
Comment Share
Share via:
MS

Posted Jul 26, 2020 at 09:12pm
Waltham has certainly lost a number of iconic businesses and buildings and individuals over the past few years, but
I would venture to say that Mr. Nocera's passing is one of the city's biggest losses.
I know that the kindnesses that he showed to my family in our times of sadness were not unique.
Lou left his mark on the hearts of people all over Waltham. Rest well and enjoy paradise, Mr.Nocera.
To the man who loved Waltham, with love, thanks and prayers from the city that loves you back.
Comment Share
Share via:
LF

Posted Jul 08, 2020 at 10:26am
Wishing you peace to bring comfort, courage to face the days ahead and loving memories to forever hold in your hearts.

Posted Jul 07, 2020 at 09:54pm
Such fond memories of Uncle Lou...whenever I hear a Tom Jones song I can hear him belting out "my my my Delilah" snd I smile...watching football in the little tv room on Floral Circle,arguing with my dad whether football or baseball was the better sport..Spagetti night on Floral Circle when he would always give me an extra meatball... how he used to tease Gram playfully - she got such a kick out of being teased by him!!
I miss him.. and always have had and will have a special place in my heart for him. Always..
And... I'm grateful for the special affection he showed his sister in law,.my mom Phyllis Cormier. I'm sure they are now enjoying their reunion in heaven.
Much love to all of you!
Your cousin Kathy
Comment Share
Share via: 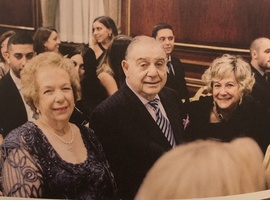