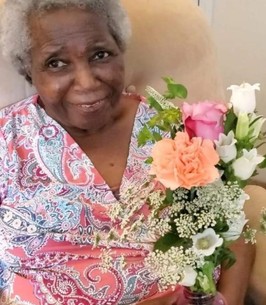 Mbuya Moni”, born Monica Sairira Breken, passed away on November 18, 2022.She was born on August 12, 1942 in Masvingo, Zimbabwe to Onesimo Dzimiri Brekeni Taderera (father) and Veronica Keresensia Taderera (Mbuya MaNdlovu) (mother). Monica was the youngest of three children born to her mother: with siblings “Mai Vakuru” Aletta Taderera Muzenda (sister) and Faustino Taderera (brother) both of whom are now deceased.

Monica did her primary schooling at “Bhetere”, a misnomer for Bethel Primary School in Masvingo, Zimbabwe. She was a clever and active student and her father egged her to go far. She did her JC at Gokomere Mission School before enrolling at Silveira House Nursing School in Masvingo, Zimbabwe, obtaining certificate in General nursing and Mid-wifery. Her working career began in the early 1960s at Harare Central Hospital where she worked for many years as a “Medical Assistant”. Because of her friendly and outgoing nature, she was well liked by colleagues at all levels of the health profession. It was during this time that she met and married her husband Elijah, with whom they have 6 children.

In search of greener pastures, she joined the National Railways of Zimbabwe. She quickly became one of the principal nurses stationed at Rugare Clinic, which served the largest contingent of railway employees while she also operated their mobile clinic. Rugare was a community of mostly migrant workers with whom she developed such a strong bond she knew practically everyone by name. After almost 15 years, she retired from the National Railways.

Still feeling her energy, she joined the medical aid department of the Harare City Council at Rowan Martin as a claims clerk. She only left City Council to work at her daughter-in-law Esther’s surgery, until she retired permanently.
Monica’s character reads like a book. She always made a first-time impact, smiling and hugging as if she had known you for years. In addition, she made everlasting impression – giving something when you parted ways. She was blessed with the gift of the givers. She believed in sharing, a value she inherited from her parents. She gave not because she had excess, but out of love for people. Monica had no “me-time”. She loved being with people and derived joy from making people happy.. She was happiest among people and she was good like that. A friend once quipped that Monica could unknowingly give you back what you had given her.

Monica was a loving and devoted mother who pulled no stops to give her children the best life could give. Even in the most difficult of times, she managed to provide not only for her children, but also for relatives and loved ones, with whom she would share all she had without reservation. Although Monica had always maintained good health, she was hypertensive. On the morning of November 18, 2022, she suffered a heart attack from which she never recovered. She is survived by six children; Edwin Kumbirai, Anthony Farai, Charles Fungai, Caroline Kudzai, and twins Rosalia Tsitsi and Roseline Mutsa and eleven grandchildren; Panashe Mphatso, Munashe, Elijah Limbani, Kumbirai Cory, Ashleigh Davidzo, Craig Mutsa, Rayann Chiedza, Samantha Rufaro, Tariro Kimberly, Munesu Evan, and Matthew Simbarashe. Monica is also survived by her daughters and sons in-law; Esther Chipata Mututu, Teresa Sarudzai Mututu, Maribeth “Beth” Mututu, Jerry Martin and Lovemore Nyazema. Monica was a mother and grandmother to anyone who crossed her path.

Monica was a devout Catholic who lived every moment of her life with the belief that prayer and service can change the world. Monica is not gone, but instead has graduated from this world onto the next. Her legacy will forever live through the wisdom and teachings that she has imparted to her children, grandchildren, and all those who have experienced her heavenly spirit here on Earth. May Her Soul Forever Rest in Peace.

Those who wish to pay their respects to Monica and her family can do so in the Mary Catherine Chapel of Brasco & Sons Memorial, 773 Moody Street, WALTHAM on Friday, November 25th from 10am until 11am. For those who wish to pay their final respects, but are unable to attend, please be sure to sign the guestbook at www.BrascoFuneralhome.com. Parking attendants will be on duty.

Family and friends are welcome to gather and celebrate Monicas's life and remember the love and friendship she shared with others at a Funeral Service in the Mary Catherine Chapel of Brasco & Sons Memorial, 773 Moody Street, WALTHAM on Friday morning November 10th at 11:00 am. Burial will follow at Calvary Cemetery in Waltham.