To share your memory on the wall of Elmer Burns, sign in using one of the following options:

After several months of declining health, Elmer died peacefully with his beloved family at his side.
Elmer Merrill Burns

After several months of declining health, Elmer died peacefully with his beloved family at his side.

Elmer was born in Waltham on July 13, 1926 to the late William and Melvina (Waddell) Burns. He was the youngest of four children.

After graduating from Waltham High School in 1943, Elmer enlisted in the United States Navy and was
stationed in China. Elmer was awarded the Good Conduct Medal and the World War II Victory Medal.

Returning to the United States, Elmer worked for United Carr Corporation in Newton, which was eventually TRW purchased by Northrop Grummar. Elmer was a much loved employee and retired after 40 years of service.

In addition, Elmer opened his own lawn service company to support his growing family.

After retirement Elmer kept busy by walking and talking to his many neighbors or spending time with his children and grandchildren.

Elmer was preceded in death by his beloved wife of 62 years Rosemary (Monahan) Burns; and his adored son Scott Andrew.

For the safety of those we love and care about during this difficult time, and for those who wish to pay their respects to Elmer and his family; you can do so in accordance with CDC, Federal and State guidelines in the Mary Catherine Chapel of Brasco & Sons Memorial, 773 Moody Street, Waltham, MA., on Thursday morning July 2nd from 10:00 a.m. - 12:00 p.m. followed by a funeral service celebrating his life at 12 p.m. Burial with United States Navy Military Honors will follow at Newton Cemetery.

For those who can not be present you may view the service live streamed by going to harborviewvideo.com/brasco

In lieu of flowers expressions of sympathy may be made in Elmer's memory to the Disabled American Veterans
State House, Room 546, Boston, MA 02133 or by going to www.davma.org/donate-now
Read Less

To send flowers to the family or plant a tree in memory of Elmer Merrill Burns, please visit our Heartfelt Sympathies Store.

We encourage you to share your most beloved memories of Elmer here, so that the family and other loved ones can always see it. You can upload cherished photographs, or share your favorite stories, and can even comment on those shared by others.

Posted Jul 02, 2020 at 08:52am
Elmer was the Mayor of Eliot Ave.Always friendly,always talkative,always happy.He was a wonderful neighbor to our family for over 60 years and will be dearly missed.To Mark,Melissa, and the entire Burns family Ioffer my respect and sympathy for the loss of a fine man. geoffrey davidson
Comment Share
Share via:
JL

Posted Jul 02, 2020 at 12:01am
Sending love ,prayers and Sympathy to you all! Wish we could be there, know you will be in my thoughts. Have many fond memories of our Christmas Eves at your home. Uncle Elmer was always kind and welcoming, may you RIP! Love Joy + Donny Lambert
Comment Share
Share via:
N

Posted Jul 01, 2020 at 02:48pm
To the Burns Family - Eliot Ave. will never be the same...So sorry for your loss.Thinking of you all.
Nancy Brandon Magliocca
Comment Share
Share via:

Posted Jul 01, 2020 at 08:50am
Elmer was one of the nicest men that I have met. Always happy to share moments, memories, and news about our families, wherever we met over the years.
Mom enjoyed meeting him at Stop&Shop in Watertown.
I would stop at His house if he was outside and we chat.
Living out of state, we lost contact.
My sympathy goes out to all of you. You dad and grandfather, was a true gentleman.
Comment Share
Share via:

Posted Jun 30, 2020 at 09:33pm
Dear Burns family,
I'm so deeply sorry for your loss. Elmer will be so missed on Eliot Avenue. In years past, it was a welcome sight to see him stroll by for his daily walks, bouncing a tennis ball or sitting in a chair in his yard taking in a sunny day. He was always smiling, quick with a good story and a real pleasure to talk with. Wishing Elmer eternal peace. Love, Anne Marie and John Dunne
Comment Share
Share via: 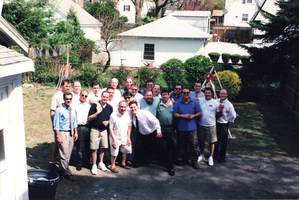 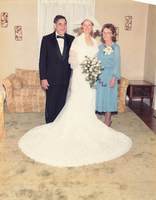