To share your memory on the wall of Richard Profita, sign in using one of the following options:

Of Waltham, passed away peacefully, Monday morning December 28th, 2020 at Santa Maria Nursing Facility at the age of 103.

Of Waltham, passed away peacefully, Monday morning December 28th, 2020 at Santa Maria Nursing Facility at the age of 103.

Born November 9th, 1917 in Waltham, MA. Richard was the last surviving member of a family of twelve. He was the son of Francesco Profita and Rosina Storella.

Richard was raised in Waltham until the age of 12 when his family sold their house and farm in Sudbury and moved to California with the hopes of buying a vineyard.

Richard pursued many interests in California. During the summer months he was a lifeguard at Santa Monica beach. He graduated from Lincoln High School in Los Angeles in 1936. One of his teachers was the founder of AARP, Dr. Ethel Percy Andrus.

He soloed and received his pilot’s license on Friday the 13th, 13 being his lucky number.

Through the assistance of his brother-in-law Seth Cacciatore who was in charge of the back lots at MGM studios in Los Angeles, he received his Screen Actors Guild (SAG) license in 1939.

He appeared in a handful of movies, notably in small scenes with Peter Lorre in the “Mr. Motto movies”.

Richard was drafted into the one year Selective Service in March of 1941 and 9 months later Pearl Harbor was bombed, so, he continued through the duration of World War II. He was in the Army, re-enforcing the First Marine Division with both branches receiving the Presidential Citation after the war.

Richard spent the bulk of his service in the South Pacific and saw action at Guadalcanal. Richard survived malaria five times while in the South Pacific. He finished his service as a medic and said many times, “I never thought I would ever see my 25th birthday”, but, with his lucky number being 13, he went through the war with 13 cents in his pocket.

In his first year of service Richard and his company were guests of a farm owner in Australia. This is where he adopted his favorite saying for toasting special occasions. When the farm owner toasted them their last night before shipping off he said, “Boys, I don’t know what the future holds for you, but, may the best of the past be the worst of the future”.

After his discharge from the Army he returned to California and began working with his younger brother at Studebaker Auto.

On a vacation back to Waltham to visit his godparents Francesco and Concetta Rizzo, he met his future wife Philomena Rizzo. They were married in 1951.

After a brief stay in California they returned to Waltham. Richard then attended Boston University and received a degree in Accounting.

He then joined his brother-in –Law John Gaziano founder of Wholesale Doors in Watertown. Richard was the comptroller for the business until his retirement.

Richard was an avid Candlepin bowler who won several state titles with the Sons of Italy bowling team. He was also Assistant Venerable for many years with the Son of Italy in Waltham.

His favorite places to visit where Hawaii and Sorrento, Italy. His favorite meal of course was “Pasta”.

Richard was a loving and devoted husband, father, Grandfather and Great Grandfather.

He is survived by his wife Philomena (Rizzo), and children Connie, Roberta, Marianne, Richard and Marco.
Grandchildren, James, Matthew and Andrew, Nicholas, Ryan and Gina and Great Grandson Jonathan.

Out of genuine concern for those we love and care deeply about during this difficult time throughout the world and in our community; family with gather to celebrate Richard's life and remember the love he shared with those he touched at a Private Funeral Service in the Mary Catherine Chapel of Brasco & Sons Memorial in Waltham on January 4th. His burial with United States Army Military Honors in recognition of his faithful and honorable service to our country will follow at Calvary Cemetery in Waltham.

A Public Celebration of Life for Richard will be held for family & friends when social distancing guidelines allow.

In lieu of flowers expressions of sympathy may be made in his memory to Sacred Heart Church, 311 River Street, Waltham, MA 02453
Read Less

To send flowers to the family or plant a tree in memory of Richard S. Profita, please visit our Heartfelt Sympathies Store.

Annamaria, Steve and Mary sent flowers to the family of Richard S. Profita.
Show you care by sending flowers

Jessie and I have always felt your kindness from back in the early 80s. Rehearsing and gigging with Rich's band were always fun at your home. Jessie and I loved visiting because Mom & Dad were so friendly, just like our own parents would be. We still saw Dad down at the Common shows and he looked great even at 100!

We send our deepest condolences to you during this difficult time. Mr. Profita's smile will be missed.

Posted Jan 03, 2021 at 07:03pm
Marco, my sincerest condolences to you and your family. I remember you telling me at Planet Fitness that your dad was turning 100 years old. That was over 3 years ago. How time flies. Quite a guy, your dad was. Safe to say he didn't miss out on anything. What a legend. A big salute to him. Mike G.
Comment Share
Share via:
AM 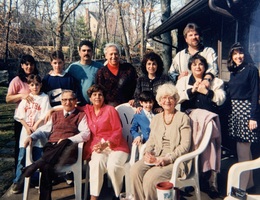