To share your memory on the wall of Emilio Mezzone, sign in using one of the following options:

Born April 7, 1934, in Waltham, MA, Mel’s motto “if it is to be it’s up to me” rang true in every element of his life — from pursuing and marrying Joan, his childhood sweetheart, the only woman who ever caught his eye, and the mother of his four children, to proudly serving in the United States Marine Corps as Sargent First Class from 1953 to 1956. He cultivated many equally valued communities of tight knit friends, from Waltham to Franklin, and especially Priscilla Beach where his family gathered for a lifetime of experiences and traditions to be passed on through three generations.

Mel lived large, and refused to sacrifice good times for cautious measures. Every day was “EXCELLENT.” He was and always will be the most loyal, cherished, and loving companion. Mel is survived by Joan, his beloved wife of 64 years; his four children, Donna Fessler, David Mezzone, Debbie Jones, and Dyan Mezzone; his sons-in-law Steven Fessler, Derek Jones, and John Hannafin; his six grandchildren, Michael Jones, Nathan Fessler, Leah Fessler, Laura Hebert, Emilia Hebert, and Harris Jones; his sisters, Anna Powers and Jean DePratti; his brother, Rusty Falzone; in addition to adoring nieces, nephews and countless friends. He is predeceased by his father, Emilio Mezzone, Sr, his mother, Mary (Fiorelli) Mezzone, and his sister, Jean Falzone.

Fly to the moon, Mel. We’ll be seeing you.

In lieu of flowers, please consider donating to Veterans Inc. in support of all US veterans, especially homeless veterans.
Read Less

We encourage you to share your most beloved memories of Emilio here, so that the family and other loved ones can always see it. You can upload cherished photographs, or share your favorite stories, and can even comment on those shared by others.

Posted Feb 11, 2020 at 04:39am
My biggest memory is any time you spent with my Uncle Mel you'd definitely were guaranteed a laugh. One vacation Uncle Mel took was a visit to Montreal. I his oldest niece was invited to go. We all packed into his Pathfinder (the car at the time) (8 of us which included grandmother Mimi) and headed out. The Pathfinder car was appropriate because Uncle Mel hadn't written any driving directions down. We got there though. When we arrived in Montreal he asked us kids which motel looked good. We all pointed to one so that's where we stayed. He was a wonderful man all around and a superburb Uncle. He has gone to Heaven now where we all will meet again but while we live here on earth right know this "Great Man" left many great memories, laughs, jokes, humor, and love. And boy could he beat anyone on "Dancin with the Stars" when you saw him dance with my beautiful Auntie Joan. And the both sang together like stars. Love you Uncle Mel. Will miss you for a bit till we meet again. ❤
Comment Share
Share via:
YF

Your LAL Horizon family purchased flowers for the family of Emilio Mezzone.

Posted Feb 09, 2020 at 03:25pm
Our prayers and thoughts for the family of Mel. He was a very special man and I am so thankful my son got to know him as father in law. Love,

Jim and Nancy Maguire purchased flowers for the family of Emilio Mezzone.

Anthony Torti purchased flowers for the family of Emilio Mezzone. 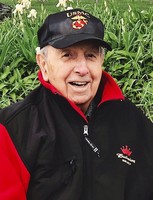