To share your memory on the wall of Mario Baldi, sign in using one of the following options:

Provide comfort for the family of Mario Baldi with a meaningful gesture of sympathy.

Print
Of West Newton, passed away peacefully on Monday, December 16th, 2019 surrounded by his loving family in his home at the age of 88.

Born on November 22, 1931 in Boston; son of the late Giacomo and Elvira (Panteri) Baldi, Mario was a lif... Read More
Of West Newton, passed away peacefully on Monday, December 16th, 2019 surrounded by his loving family in his home at the age of 88.

Born on November 22, 1931 in Boston; son of the late Giacomo and Elvira (Panteri) Baldi, Mario was a lifelong resident of Newton.

Mario was an auto mechanic for many years and owned and operated Mario’s Gulf in Milton. He also worked for Hamilton Realty and Needham Saw and Tool. His Hobbies included woodworking, carpentry and general home repair.

His family and his friends were the most important aspects of his life. He was an active member of Saint Bernard Parish and a longtime member of the Waltham Lions Club, where he donated his time to the charities they supported.

He was predeceased by his beloved wife Gwendolynne "Lynne" A. (Caruso) Baldi and his cherished son the late Nicholas Baldi.

He was predeceased by his siblings Charles, Baldo and Anna.

The family wishes to thank those who helped care for him from Springwell, Home Instead, and Good Shepard Community Care (Hospice)

Relatives & Friends are respectfully invited to attend Funeral Services in celebration of Mario’s Life from the Brasco & Sons Memorial Funeral Home, 773 Moody Street, WALTHAM, on Saturday morning Dec. 21st at 9:00 a.m. with a Mass of Christian Burial at Corpus Christi-Saint Bernard Parish, 1523 Washington Street, Newton at 10:00 a.m. Interment will follow at Calvary Cemetery in Waltham. Visiting Hours will be held in the Funeral Home on Friday Dec. 20th from 4 - 8 p.m.

In lieu of flowers expressions of sympathy may be made in his memory to Springwell, 307 Waverly Oaks Road, Suite 205, Waltham, MA 02452 or Good Shepherd Community Care, 90 Wells Avenue, Newton, MA 02459.
Read Less

We encourage you to share your most beloved memories of Mario here, so that the family and other loved ones can always see it. You can upload cherished photographs, or share your favorite stories, and can even comment on those shared by others.

Robert Kirubi, Ray & Dee, and others have sent flowers to the family of Mario Baldi.
Show you care by sending flowers

Posted Dec 31, 2019 at 08:30pm
Hi Dad tonight you would have been over my house playing cards and eating Chinese food
I miss you so much ,,,,,it’s hard missing my other half to hang out with am so lost daddy
But I know your with mom and I hope mom and you and your son Nicholas have a nice New Years ......dad your home now
See you soon love you dad lots
Your daughter Pamela
Comment Share
Share via:
MB

Posted Dec 20, 2019 at 09:13pm
It was Christmas week a long time ago, and I was just a little kid living on Channing Road in Watertown, when a knock on the front door caused a flurry of excited adult voices to fill the room. All of a sudden the door flew open and there stood Santa Claus, all dressed up from head to toe in a white snowy fringed suit, with a full white beard, a bobbled hat, and most especially with a big sack on his back. I remember standing there, frozen, peering into those sparkling animated eyes, captivated for sure. But it wasn't that ever-oh-so-loud Ho Ho Ho that gave up Santa's true identity on that long ago snowy night, but instead it was the unmistakable sound of that very classic laugh which instantly followed. It was a very magical moment . As it still remains today. So Mario I know I speak for many, and to your family, when I say we thank you for the memories, the magic, the caring, and all of that very special sparkling laughter.
Comment Share
Share via:
RK

Posted Dec 20, 2019 at 01:46am
Dear Kim and family, with our deepest condolences and our prayers. Janet, Chris, Maryann, Andrew and the whole family in Kenya are thinking of you

Posted Dec 19, 2019 at 08:16pm
Pamela & the Baldi family,
So sorry for your loss, your dad was a great person, I can still hear his laugh.
Deanna Arseneau
Comment Share
Share via:
RD 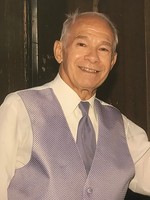 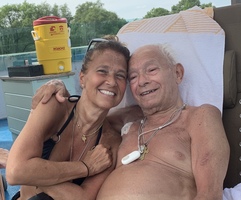 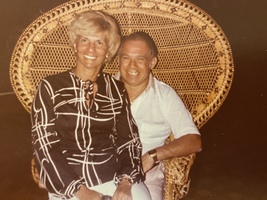 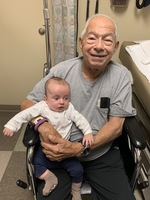