To share your memory on the wall of Louis Attardo, sign in using one of the following options:

Print
Of Wayland, passed away peacefully early Friday morning December 13th, 2019 surrounded by his loving family in his home at the age of 87.

Born on June 22, 1932 in Waltham; son of the late Salvatore and Josephine (Terrasi) Attardo, Louis... Read More
Of Wayland, passed away peacefully early Friday morning December 13th, 2019 surrounded by his loving family in his home at the age of 87.

Born on June 22, 1932 in Waltham; son of the late Salvatore and Josephine (Terrasi) Attardo, Louis was raised in Waltham and has been a Wayland resident for the past 55 years.

A graduate of Saint Charles High School; Louis started his career in the banking industry at the age of 18 at the former Newton Waltham Savings Bank. He served in many different capacities for the bank. Over the years and many mergers later Louis retired as Executive Vice-President and Chief Financial Officer from Bank of America at the age of 65. After a brief retirement Louis went to work for his son-in-law at Kennedy & Company Garden Center, where he enjoyed his daily interactions with many of the customers.

Louis served proudly with the United States Army during the Korean War from 1952 to 1954.

Family was the central focus of his life; he loved family gatherings, spending time mushrooming with his brothers and most especially his nights out dancing with his wife.

He was predeceased by his beloved wife Beatrice Joy (Sterling) Attardo in June of 2018.

Relatives & Friends are respectfully invited to attend Funeral Services in celebration of Louis' Life from the Brasco & Sons Memorial Funeral Home, 773 Moody Street, WALTHAM, on Thursday morning Dec. 19th at 9:30 a.m. with a Mass of Christian Burial at Sacred Heart Church, 311 River Street, Waltham at 10:30 a.m. Interment will follow with United States Army Military Honors at Calvary Cemetery in Waltham. Visiting Hours will be held in the Funeral Home on Wednesday Dec. 18th from 4 - 7 p.m.

Expressions of sympathy may be made in his memory to the Waltham Boys & Girls Club, 20 Exchange Street, Waltham, MA 02453
https://walthambgc.org/donations/
Read Less

To send flowers to the family or plant a tree in memory of Louis A. Attardo, please visit our Heartfelt Sympathies Store.
Print

Love, Brian, Paula, Daniel, and Sarah and Love, Tom, Will & Kinn, Greg & Kanak sent flowers to the family of Louis A. Attardo.
Show you care by sending flowers

Posted Jan 11, 2020 at 10:24am
I first met Lou when LuAnn and I were in first grade together, and got to know him better in the 70s at Newton-Waltham Bank. Such a sweet man who I always enjoyed chatting with. He knew more about my family than I did, growing up near each other on Cedar and Calvary Streets. My deepest condolences to his family for their loss.

Flowers were purchased for the family of Louis Attardo. Send Flowers

Posted Dec 18, 2019 at 04:31am
To the Attardo Family,
I have known your Dad my entire life with many great memories from Cedar St. He was a kind, generous man who always had a smile and hug anytime I ran into him. My Thoughts and Prayers are with you all. Pam Feeley
Comment Share
Share via:
HS

Posted Dec 17, 2019 at 02:03pm
Sent with love and remembrance of a special man. Our dear Uncle Lou. The last of our "Greatest Generation".

Flowers were purchased for the family of Louis Attardo. Send Flowers 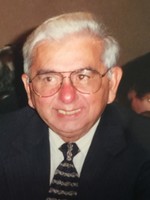