To share your memory on the wall of Waltham Police Officer Charles Gryska, sign in using one of the following options:

Of Wayland and formerly of Medfield, age 33, passed away peacefully at home on December 6, 2019 following a courageous battle with brain cancer.

Of Wayland and formerly of Medfield, age 33, passed away peacefully at home on December 6, 2019 following a courageous battle with brain cancer.

Officer Gryska was born on January 9, 1986 in Newton, MA to Dr. Paul vonRyll Gryska and Margaret (Holmes) Gryska. He was a 2004 graduate of Medfield High School and a 2008 graduate of the University of Massachusetts at Dartmouth, where he graduated with a degree in Criminal Justice and was a Captain of the Football Team. It was Charlie’s life-long dream to pursue a career in the law enforcement field. In 2012, he graduated from the New England Regional Police Institute and was simultaneously working as a member of the Security Department at Massachusetts General Hospital. Upon being hired as a member of the Waltham Police Department in 2015, Charlie attended the Reading Police Academy and began his work as a patrolman.

Officer Gryska cherished spending time with family, especially his wife and three children. He loved “date nights” with his wife, Jackie, and he found great pride in watching his son, Jack, play soccer, his son, Bryce attend his first day of pre-school and his daughter, Abby, take her first steps. He also loved spending time with his family during the summer on Cape Cod and in Maine.

Aside from his passion for law enforcement, Charlie was an avid New England sports fan. He enjoyed cheering on the New England Patriots and accompanied his oldest son to his first Red Sox and Celtics games earlier this year.

Charlie is survived by his loving wife and college sweetheart, Jacqueline (McManus) Gryska and his three children, Jack, Bryce, and Abby; his father and step-mother, Paul vonRyll Gryska and Catherine Purcell-Gryska; his mother, Margaret Holmes Gryska; his brother, Erik Gryska; his sister and her husband, Elizabeth and Michael Rice; his in-laws, Paul and Dolores McManus; his sister-in-law and her husband, Kara and Frank Pagliuca; and five nieces, Kiley, Mikayla, Halsey, Emma, and Henley.

Relatives & friends are respectfully invited to attend Funeral Services in celebration of Charlie's Life from the Brasco & Sons Memorial Funeral Home, 773 Moody Street, WALTHAM on Friday Dec. 13th at 8:30 a.m. with a Mass of Christian Burial at Our Lady Help of Christian Church, 573 Washington Street, Newton at 10:30 am. Services will conclude with Waltham Police Honors in recognition of Charlie's faithful and honorable service to the City of Waltham. Visiting Hours will be held in the Brasco & Sons Memorial Funeral Home on Thursday Dec. 12th from 3 - 8 p.m.

In lieu of flowers, memorial remembrances in Officer Gryska’s name can be made to the #whynotdevin Foundation to End DIPG. Devin Suau, a 6-year-old boy who dreamed of becoming a policeman, died in 2017 after an 8-month long battle with brain cancer. The address is 5 Laclede Ave. Framingham, MA 01701.
Read Less

To send flowers to the family or plant a tree in memory of Waltham Police Officer Charles C. "Charlie" Gryska, please visit our Heartfelt Sympathies Store.

We encourage you to share your most beloved memories of Waltham Police Officer Charles here, so that the family and other loved ones can always see it. You can upload cherished photographs, or share your favorite stories, and can even comment on those shared by others.

The Casali Family & The Johansen Family, Lindsay Gallagher Maydick & Family, and other have sent flowers to the family of Waltham Police Officer Charles C. "Charlie" Gryska.
Show you care by sending flowers

Posted Dec 13, 2019 at 01:51pm
We have wonderful memories of the sailing days with Flemish Cap, Gossamer Wings, and Wisch Bone and all our kids playing together. We are sending you our deepest sympathies. Melanie and Paul Wagner and Family
Comment Share
Share via:
AS

All of your Family at Newton Wellesley Surgeons

Posted Dec 12, 2019 at 12:07pm
Charlie will be in our hearts forever. The Altenhein/Mcmanus family

The Casali Family & The Johansen Family

Posted Dec 10, 2019 at 12:05pm
Jackie & family - We are so sorry for your loss. May you be comforted by the outpouring of love surrounding you. Peace, prayers & blessings, 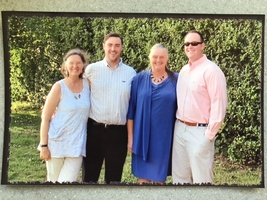