To share your memory on the wall of Catherine Douglas, sign in using one of the following options:

Of Carver died Wednesday October 2nd at the Beth Israel Hospital in Boston after a period of illness.

Born in Newton, Massachusetts she has been a resident of Carver for the last ... Read More
Mrs. Catherine ( Burke - Ellis ) Douglas 85,

Of Carver died Wednesday October 2nd at the Beth Israel Hospital in Boston after a period of illness.

Born in Newton, Massachusetts she has been a resident of Carver for the last 20 years having lived previously in Medway and Natick.

She was the self-appointed family care giver always looking out for the others before herself. Always thinking of others as she was always generous to what she considered the most needy charities.

She was a devotee of old movies and lately enjoyed watching “America’s Got Talent” & “Dancing with the Stars” on television. She was a lifelong fan of her “Boston Red Sox”.

Catherine and her husband Bill so truly enjoyed their times sitting together by the Ocean enjoying their coffee.

Catherine was employed for many years as a Bookkeeper for local companies.

Catherine is survived by her husband William L. Douglas, her son Kevin M. Ellis and his wife Donna (Martin) Ellis of Uxbridge, her grandchildren Elizabeth Cairns and her husband Packie, Micheil and his wife Rachelle, Sarah Ellis, Chris Hutchinson & Jeffrey Hutchinson. In addition, she leaves 6 Great Grandchildren & Many Nieces & Nephews.

In Lieu of Flowers Expressions of sympathy may be made in Catherine’s memory to the American Lung Association @ www.lung.org.
Read Less

To send flowers to the family or plant a tree in memory of Catherine A. Douglas (Burke), please visit our Heartfelt Sympathies Store.

We encourage you to share your most beloved memories of Catherine here, so that the family and other loved ones can always see it. You can upload cherished photographs, or share your favorite stories, and can even comment on those shared by others.

Nancy and Brian sent flowers to the family of Catherine A. Douglas (Burke).
Show you care by sending flowers

Nancy and Brian purchased flowers and planted a memorial tree for the family of Catherine Douglas. Send Flowers 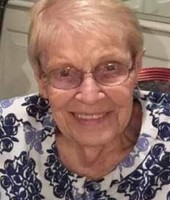