To share your memory on the wall of Ruth Elander, sign in using one of the following options:

Of Waltham, passed away peacefully early Monday afternoon December 28th, 2020 surrounded by her loving family at Mount Auburn Hospital in Cambridge after a brief illness at the age of 89.

Of Waltham, passed away peacefully early Monday afternoon December 28th, 2020 surrounded by her loving family at Mount Auburn Hospital in Cambridge after a brief illness at the age of 89.

Born on March 15, 1931 in Boston; daughter of the late Oskar J. Nyman and Anna Amelia Fredericka (Larson) Nyman. Ruth was raised in the Beacon Hill and Dorchester sections of Boston before moving to Waltham after her marriage. She enjoyed many summers at the family home in Fairhaven on West Island. Ruth attended Woodrow Wilson Senior High School and graduated from Dorchester High School for Girls in 1948; she furthered her education at Boston Clerical School.

As a teenager Ruth was a volunteer for the Civil Air Patrol. She went on to work at the Raytheon Corporation for several years. Much of her life was dedicated to the Scandinavian Living Center of Newton where she worked as a Correspondence Secretary for over 45 years. She served as Past President of the Scandinavian Charitable Society of Greater Boston and Past President of the Swedish Square & Compass Club. Ruth had a strong faith in her God and had been an active and devoted member of the First Lutheran Church of Waltham for years. She had a love for singing and for 25 years was a member of the church choir and had been a soloist.

Another enjoyment of Ruth's was sewing; she belonged to the American Sewing Guild serving as Co-Chair for the neighborhood. In her spare time she loved to dance and go swimming at West Island. Ruth was a member of Palestine Chapter, Order of the Eastern Star for 59 years.

Her greatest enjoyment in life came from being surrounded by her family and her friends.

For the safety of those we love and care about during this difficult time, and for those who wish to pay their respects to Ruth's family can do so in accordance with CDC, Federal, State and Local guidelines in the Mary Catherine Chapel of Brasco & Sons Memorial, 773 Moody Street, WALTHAM, during Visiting Hours on Thursday morning December 31st from 9 - 11 a.m. Followed by a Funeral Service to celebrate Ruth's life and remember the love she shared with those she touched at 11:00 a.m. Her burial will follow at Mount Feake Cemetery in Waltham.

In lieu of flowers expressions of sympathy may be made in her memory to the Scandinavian Living Center, 206 Waltham St., Newton, MA. 02465
Read Less

To send flowers to the family or plant a tree in memory of Ruth Viola Elsie Elander (Nyman), please visit our Heartfelt Sympathies Store.

We encourage you to share your most beloved memories of Ruth here, so that the family and other loved ones can always see it. You can upload cherished photographs, or share your favorite stories, and can even comment on those shared by others.

Posted Dec 30, 2020 at 02:55pm
Dear Diane; We all wish we could be with you during this difficult time. Our prayers and condolences to all of the Elanders.

The Baillio families purchased the The FTD Deepest Sympathy Arrangement for the family of Ruth Elander. Send Flowers 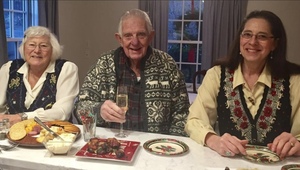 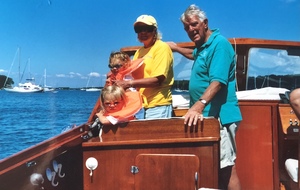