Obituary for Caroline A. DeMeo (Mobilia) 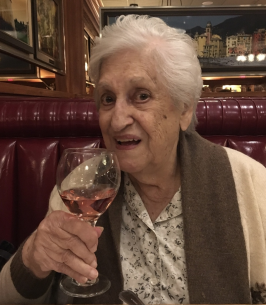 Caroline Ann (Mobilia) DeMeo of South Yarmouth, formerly of Waltham, passed away on November 1,
2022, she was 95 years old. Mrs. DeMeo was the wife of 50 years to the late Francis DeMeo, who
passed away in 2003. She was the daughter of Antonio and Giusepina (Santolucito) Mobilia of Waltham.
She is survived by 5 children: Anthony (and wife Judy) DeMeo, Francis Jr., Richard, Ann Pettrone and
Mary Jo (and husband Vito) Fulciniti. She was the grandmother of the late Frankie DeMeo, and is
survived by 9 grandchildren and 1 great grandson. She was the sister of the late Catherine Mobilia and
brothers Angelo and Felix Mobilia, all of Waltham. She is also survived by sister-in-laws Jacqueline
DeMeo of Newton and Lorraine DeMeo of Waltham as well as many nieces and nephews.


Carol was born in Waltham on July 13, 1927, and lived in Waltham for 60 years before moving to Cape
Cod. She was a graduate of Waltham High School class of 1946. After graduation she worked for the
Potter Press Company until her marriage in 1953. She also worked at the Gerald Ashe Company until
she started a family and became a full-time mom. She was an active member of the Sacred Heart
Church of Waltham for many years. As a young woman she was a member of the church Sodality, the
choir, was co-founder of the Holy Rosary Guild and later served as a Eucharistic Minister.

Carol and her husband enjoyed many years with a group of life-long friends known as “the gang”, and
experienced many happy times as a member of the social group, the Restless Rustlers club. She loved to
sing and tell stories and was also an avid Red Sox fan, rarely missing a game.

She was devoted to her family and faith, and enjoyed spending her later years with her children and
grandchildren. To her family, friends and all who knew her she was truly a Sweet Caroline.

Family and friends are respectfully invited to pay their respects to Caroline and her family at The Brasco and Sons Memorial Funeral Home, located 773 Moody Street Waltham on Monday, November 7th from 4 pm to 7 pm. For those who wish to pay their final respects, but are unable to attend, please be sure to sign the guestbook at www.BrascoFuneralhome.com. Parking attendants will be on duty.

Caroline’s Life will be Celebrated at a Mass of Christian Burial on Tuesday morning November 8th at Sacred Heart Church, 311 River Street, Waltham at 10 AM. Committal Services will follow at Calvary Cemetery in Waltham.