To share your memory on the wall of (Ret.) John Russell Jr. WPD, sign in using one of the following options:

Print
Of Waltham, passed away peacefully Friday evening July 19th, 2019 at the Royal Meadow View Nursing & Rehabilitation Center in North Reading after a period of declining health at the age of 89.

Born on May 29, 1930 in Somerville; son of ... Read More
Of Waltham, passed away peacefully Friday evening July 19th, 2019 at the Royal Meadow View Nursing & Rehabilitation Center in North Reading after a period of declining health at the age of 89.

Born on May 29, 1930 in Somerville; son of the late John H. Russell Sr. and Daisy (Tiffany) Russell, John was a resident of Waltham for most of his life.

John was a proud Veteran of the United States Army serving during the Korean War.

John was an active and devoted member of the Waltham Masonic Lodge; serving twice as Past Master before it became the Triad Lodge A.F. & A.M. Freemasons. He also served as Past Master of the Police Square Club.

He was a motorcycle enthusiast and was a Founder & Past President of Mass Chapter VII of the Blue Knights.

For over 35 years, winters for John and Nancy were spent in their motor home and on a motorcycle traveling around the United States and Canada. He loved golfing and finding new restaurants. He enjoyed keeping busy.

John is survived by his beloved wife of 69 years Nancy (Oberly) Russell, his loving children John E. Russell and his wife Geraldine (Gloddy) of Spencer; Kevin T. Russell and wife Susan (Halpin) of Bellingham; and Sharen, Karen and Wendy Russell all of Waltham; and his dear sisters Donna West-Reid of Waltham and Beverly Azzaline of Nazareth PA. In addition he is survived by his cherished grandchildren and many nieces & nephews.

Relatives & Friends are respectfully invited to attend a Memorial Service in celebration of John's Life in the Mary Catherine Chapel of Brasco & Sons Memorial, 773 Moody Street, WALTHAM, on Thursday afternoon July 25th at 3:00 p.m. Services will conclude with United States Army and Waltham Police Honors in recognition of John's faithful and honorable service to his country and the City of Waltham. Visiting Hours will be held in the Mary Catherine Chapel on Thursday July 25th from 1:00 - 3:00 p.m.
Read Less

To send flowers to the family or plant a tree in memory of (Ret.) John H. Russell Jr. WPD, please visit our Heartfelt Sympathies Store.

We encourage you to share your most beloved memories of (Ret.) John here, so that the family and other loved ones can always see it. You can upload cherished photographs, or share your favorite stories, and can even comment on those shared by others.

Guaranteed hand delivery by a local florist
B7

Posted Jul 24, 2019 at 12:56pm
Nancy and family, your Brothers and Sisters of the Blue Knights Mass Chapter 7, want you to know were are thinking of you both in this difficult time.

Posted Jul 24, 2019 at 08:05am
Dear Nancy and to all the Russell family, we’re so sorry to hear about John, please accept our sincerest condolences. John was the first and best motorcycle cop Waltham has ever seen, tough but compassionate, always professional. Unfortunately we are unable to attend his service, may God bless John Russell. Gary Marchese and Family.
Comment Share
Share via:
RC

Posted Jul 23, 2019 at 08:08pm
I am so saddened, yet relieved to know John is at peace now. I have a lifetime full of memories of our travels together with our other Brothers. Whether in Waltham or Newtonville or across the state, we sincerely enjoyed the Masonic bonds that kept us together as friends and brought us new experiences all the time. I can still hear the laughter, feel the pats on the back, and even smell the cigar smoke of our fraternal encounters. I can only hope I was able to contribute as much to our good times together as John did. You will forever be my Friend and my Brother.

Posted Jul 23, 2019 at 06:54pm
John brought so many gifts to our life. We will never forget him! May you be comforted by the outpouring of love surrounding you. 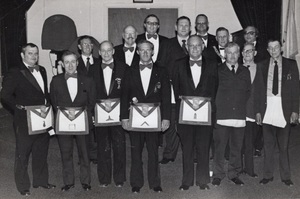 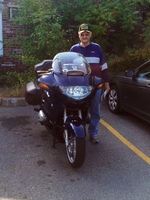 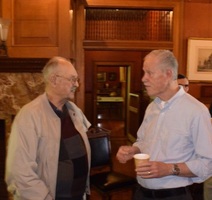