To share your memory on the wall of Robert Emmetts, sign in using one of the following options:

Provide comfort for the family of Robert Emmetts with a meaningful gesture of sympathy.

Passed away peacefully on March 12, 2020 at Newton-Wellesley Center for Alzheimer’s surrounded by family at the age of 92. He passed on what would have been his loving wife, Marie’s 90th birthday.

Passed away peacefully on March 12, 2020 at Newton-Wellesley Center for Alzheimer’s surrounded by family at the age of 92. He passed on what would have been his loving wife, Marie’s 90th birthday.

Born in Newton on December 25, 1927, Bob and Marie raised their six children in Waltham.

After retiring from his job of nearly 40 years as an Oil Burner Technician, Bob and Marie moved to Oklahoma, where they became an intricate part of a very close knit community. Bob was always a vigorous, energetic man who worked hard and was always on the go. He was a jack of all trades and a master of many, one of which was the art of stained glass. Bob was proud to have made the stained glass windows for their church where he was also the caretaker and groundskeeper.

In his later years, Bob resided in assisted living here in Massachusetts with his dog Fluffy. Bob enjoyed long walks with Fluffy, jigsaw puzzles, music and Happy Hour every afternoon in the pub.

Bob will be greatly missed by all who knew him.

Bob is predeceased by his beloved wife of 65 years, Marie and his son Russell.

A private Graveside Funeral Service celebration Robert's Life will be held for his family at Mount Feake Cemetery in Waltham.
Read Less

To send flowers to the family or plant a tree in memory of Robert A. "Bob" Emmetts, please visit our Heartfelt Sympathies Store. 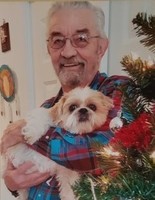